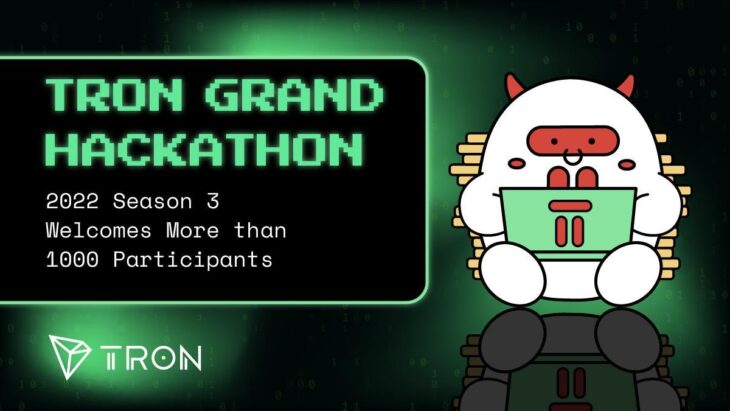 The TRON Grand Hackathon 2022 Season 3 submission period came to a close on Monday, November 14, with more than 1000 registered to participate.

TRON DAO and BitTorrent Chain (BTTC) have an exciting lineup of 50+ partners and judges for Season 3. This innovation event draws together crypto’s most prestigious institutions to offer their expert opinions on which project will most accelerate the growth of the TRON ecosystem. The Judging period will be between November 29 to December 12. Five winners will be selected from each track. The winners of Season 3 will be revealed on Friday, December 16.

Season 3 #HackaTRON has a total of six tracks: DeFi, GameFi, NFT, Web3, Ecosystem, and Academy with an aggregate prize pool of $1.2 million.

The recently introduced Ecosystem track was created to attract Ethereum projects seeking to increase their impact. The focus of this season will be on cutting-edge, cross-chain solutions, and the widespread usage of blockchain technology. Due to its compatibility with the Ethereum Virtual Machine (EVM), TRON has always enabled cross-chain capabilities. Developers now have more choices for deploying and interacting with other L1 blockchain ecosystems via the BTTC bridge.

The new Academy track was carried out via an in-person event that welcomed more than 200 university students from seven top-tier schools consisting of Harvard, MIT, Yale, UPenn, Princeton, Northeastern, and Boston University. The “Hacker House” was on the Harvard campus and hosted up-and-coming blockchain developers with various projects over the past weekend. Teams competed for a share of the $74,000 prize pool, which was allocated specifically for this track. A new initiative called the TRON Academy Program, which looks to establish blockchain partnerships on college campuses across the globe, officially launched with the Hacker House event.

The TRON Grand Hackathon, a.k.a. HackaTRON, provides developers with the tools they need to create and implement DeFi, GameFi, NFT, and Web3 decentralized applications (dApps). TRON hopes to build a sizable, worldwide blockchain community and is actively seeking developer teams who wish to build in the TRON and BTTC ecosystems.

TRON DAO is a community-governed DAO dedicated to accelerating the decentralization of the internet via blockchain technology and dApps.

Founded in September 2017 by H.E. Justin Sun, the TRON network has continued to deliver impressive achievements since MainNet launch in May 2018. July 2018 also marked the ecosystem integration of BitTorrent, a pioneer in decentralized Web3 services boasting over 100 million monthly active users. The TRON network has gained incredible traction in recent years. As of November 2022, it has over 120 million total user accounts on the blockchain, more than 4.2 billion total transactions, and over $11.8 billion in total value locked (TVL), as reported on TRONSCAN. In addition, TRON hosts the largest circulating supply of USD Tether (USDT) stablecoin across the globe, overtaking USDT on Ethereum since April 2021. The TRON network completed full decentralization in December 2021 and is now a community-governed DAO. In May 2022, the over-collateralized decentralized stablecoin USDD was launched on the TRON blockchain, backed by the first-ever crypto reserve for the blockchain industry – TRON DAO Reserve, marking TRON’s official entry into decentralized stablecoins. Most recently in October 2022, TRON was designated as the national blockchain for the Commonwealth of Dominica, which is the first time a major public blockchain partnering with a sovereign nation to develop its national blockchain infrastructure. On top of the government’s endorsement to issue Dominica Coin (“DMC”), a blockchain-based fan token to help promote Dominica’s global fanfare, seven existing TRON-based tokens – TRX, BTT, NFT, JST, USDD, USDT, TUSD, have been granted statutory status as authorized digital currency and medium of exchange in the country.