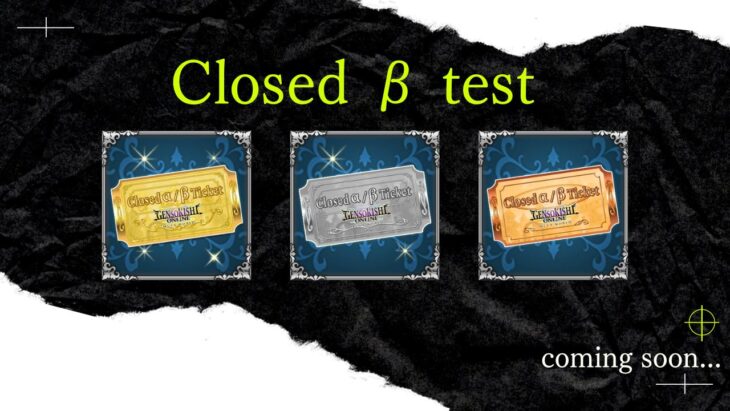 Metaverse Project Genso is thrilled to announce the details regarding the Closed Beta Test.

Details are as follows

■ How to participate in the Closed Beta Test:

・All players who have Closed Alpha / Beta Testing Tickets will be able to participate in the test.

(The same NFT ticket used to enter the Closed Alpha can be used in the Closed Beta Test.)

・Log in to the Beta test from the official homepage.

(A button will appear at the top of the homepage once the Beta test starts.)

We will be providing the WebGL version only at this time.

In-game events (such as the ranking events) hosted by the development team has been discontinued.

In-game events will now be hosted by affiliated guilds and by the Genso community. Special NFT prizes will be available for these in-game events.

We will announce the details of the in-game events within the various community channels (Discord Channels) as soon as the news becomes available.

Level cap has been changed from level 10 to level 20

Number of maps available has been expanded to 15

Opening of Elrond Shopping Mall and Art Museum The number of stores in the Shopping Mall will continue to expand until and after the Official Release.

■Updates that will happen DURING the closed Beta

*Some motions and effects will still be provisional. The team will work on implementing this before the official release.

*The closed beta is a test. Therefore, all imported NFTs will remain in your wallet even after the test is over.

*Projected to be available early August.

The team is currently working on completing the above two points.

The NFT import function is expected to be available by mid-August. We will determine the end date of the closed beta test depending on the timing of the update.

We will also announce the schedule for other features in the near future.

The Closed Beta Test will begin in a week’s time, and the development team will continue to improve the contents for a better and successful Beta test. We will continue to make news announcements and provide updates to the community!!

Please take this opportunity to join the Genso community at this time!

Genso will continue to provide cryptogame enthusiasts with updates on this project.

Stay tuned here to get the latest on GensoKishi Online!